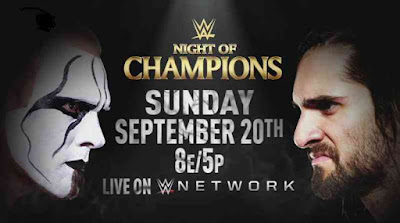 I had debated whether or not I wanted to watch this. All day I didn’t want to spend the 9.99 to get this. Then at the last minute my wife had to go to work and I decided to bite the bullet and see if I could watch the WWE once again screw me over. Night of Champions 2015 was live from Houston and I’m glad I didn’t have to pay the high costs of PPV from back in the day, aren’t you?

Stardust and The Ascension defeated Neville and The Lucha Dragons

I think this is what went down. I have no idea how I missed what was going on. I don’t really like these guys, but at least they got a pay day right? I just can’t get over the fact that The Ascension were already buried by the legends, specifically JBL on Raw. Just sayin. Oh and Neville is the man creative forgot, so there’s that.


This was an ok match. Owens did his best here, but I hated the finish. The finish made this match suck for me. A distraction roll up is what I call it. That’s all it takes to beat Ryback? A scrape to the eyes and a roll up? What is this 1985? No thanks.

No thanks. Without Lana’s little dance from when she was approached by Fandango, this didn’t hold much water. These two are ok but this feud makes no sense and is boring. Ziggler is wasted here.

The Dudley Boyz defeated The New Day via DQ

This match was very fun. The guys in New Day sure know how to create an entertaining match up. I loved it, and the crowd was way into what they were doing. The Dudleyz can still go, and that’s great. Bubba is a great performer at his age, and Devon, come on, DEVON TESTIFY! This was a fun showing, especially with Xavier and the Trombone! Overall a decent match with a terrible ending. I loved the table spot at the end, but alas, no title change. New Day Rocks, New Day Rocks….it’s hard to make it sound cool via text.

This was the best Nikki Bella match I’ve ever seen. Why? Because it told a psychological story. Charlotte had to overcome the onslaught of attack on her leg. She had to overcome the constant pressure of the champion, and dig in and win. Nikki is not a great wrestler, but here, it made sense. Attack a limb, and just keep working on it, but alas, she made a mistake. This is a good way to end the title reign she’s had.

The announcement of Y2J was cool, but he doesn’t fit this feud in my view. Why didn’t they go with Samoa Joe? Or why didn’t they go for someone bigger? Kane would’ve worked here, and I hate Kane. Chris Jericho still has some go, and it was nice to see this go down. When he lost the match though, it seemed awkward. He didn’t give any apologies, he just shoulder pushed his way through Ambrose and Reigns and that was that.

This was a good match, but not nearly as good as their Summerslam match up. Given limited time, they put together a good enough moment. Rollins lost clean here, and Super Cena will return to his Raw showcases I’m sure.

Word on the street is Sting got injured. I was impressed by what he did. He came off the top rope in crazy fashion, took a table bump, and went for it against Rollins. However, Sting got injured and it seemed as though he was showing his age. That being said, it wasn’t worthwhile. It was ok. But Sting is NOT in his prime, while Rollins definitely is. Rollins escapes with the title.


Sheamus cashed in, or tried. But Kane came out and beat up Rollins. I DO NOT WANT TO SEE KANE OR THE BIG SHOW IN WWE EVER AGAIN!!! I threw a can at my television after seeing them.

Overall, Night of Champions 2015 gets a C rating. It’s passable. But it wasn’t a great show at all. I was bored throughout, with few exceptions. Oh well.
Posted by Unknown at 4:23 PM No comments: