I first heard Dasharpshooters podcast when I lived in Seattle, Washington. I was going through rough times, and well, they helped me get my mind off of things. Today I find out that Dasharpshooters Pro Wrestling podcast is done.

I'm sure they are more sad than I am, but man, I am going to miss them.

There are other podcasts out there, but none of them seem so personable and just fun. Dasharpshooters always seemed to be honest, and without pretense.

I hope you guys do well in whatever you do.

I'll miss hearing you guys argue back and forth.

Man, this day is done.

Perhaps we'll hear you again, and if not, well, good luck.

RIP Dasharpshooters Wrestling Podcast
Posted by Unknown at 9:55 AM No comments: 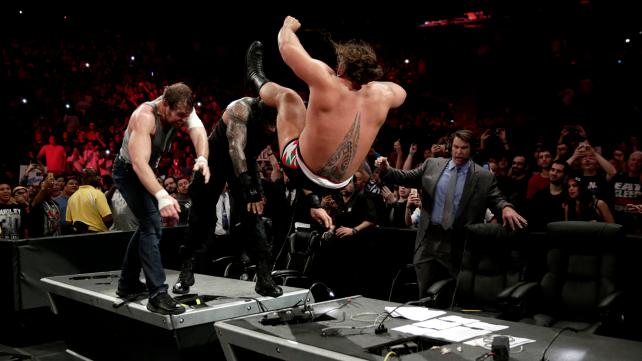 CM Punk said it right. When he left, us wrestling fans would be stuck with Vince McMahon’s dufus son in law and idiot daughter. That’s how we open Raw, and that’s what you’re going to be spoon fed going into Wrestlemania for a match between Triple H and possibly Roman Reigns. I don’t like it, and well, you probably don’t, but let’s make the best of it, right? Here are my thoughts on the HULU edition of Raw, since I don’t have the heart to see 3 hours of a show.

The show opens up with The Idiot Daughter, Vinnie Mac, and the Dufus Son In Law. What is this 1999? Oh well, positivity! Don’t be sour! Ugh.


Triple H running down Roman Reigns to try and put him over is stupid. This is the same water treaded over and over again from the past. I know history repeats itself, but meh, meh is all I can say. With the sole exception of the fans cheering Trips and chanting Aj Styles. Styles, man, what a catch for the WWE if they don’t bury him with bad gimmicks, and getting pinned by The Big Slow…Show. Tired, that’s what this is.


Kevin Owens buried Dolph Ziggler. Ziggler and Owens had a very short match in which Owens just dominated for the most part. Owens didn’t sell last night’s Rumble beating he took or anything. It is what it is. He’s very good, but it pains me to no end to see Ziggler getting buried yet again. WWE likes to throw out shovels, I guess.

Way to bury more talent WWE. The Dudley Boyz win after Flor Rida has an interaction. Bo Dallas rapping was funny, but the short match that ensued was not. Terrible.


This was not a 4 star classic. However, Styles absolutely blew away the critics. The missed Frog Splash had so much air, it was insane. The reversal finish roll up sequence, although short, was genius, and Jericho versus Styles can’t be over. These two are destined to have a serious amount of matches, with Styles getting the final rub, and probably his first loss to Jericho in the near future. Whatever the case may be, Aj Styles definitely showcased professionalism, and that he belongs in the WWE.


Charlotte interfered in this match. But what got me was the commentary. JBL goes, “look at that hair Michael. It’s red, purple, the ref is bald, it’s like Muppets. Muppets in the ring”. Oh F YOU JBL! You just ruined the epic 2 minute or so match that the divas had. Ugh. Same old BS from WWE and their women’s division.


Why hasn’t Kane retired? Bray Wyatt wins, Kane loses, this is a tired match we already saw 100 times before. The only thing that could be worse is if we saw Roman Reigns battle The Big Show again. This is a horrendous edition of Raw so far, and I’m trying to be positive.

The Rock Returning IS NOT AWESOME


The Rock is a part time, if that, former wrestler. He’s hijacked Wrestlemania main events, he’s beaten top stars, and now he’s back? I’m sick of this guy. You’re telling me that with so many up and coming talents on the WWE roster, you can’t give them more time? There’s SO many wrestlers that get no time at all, but instead, you bring the Rock out to talk. WWE is not a wrestling company. The Rock sucks, I don’t think he’s necessary for 2016, but hey, I’m just a dude on a random blog writing about fake fighting to an audience of nobody.

The New Day segment was cool, but having The Rock bury them is not the best way to put them over, or is it? Maybe it is, what do I know. This HULU edition is awful.


This is illogical. Reigns and Ambrose win, don’t get me wrong. It was expected. Even with Barrett and Alberto Del Rio at ring side, they win? What the hell? Ok, I’ll be ok with it. Rusev goes through the announce table, and then out comes the idiot daughter. This is where logic gets thrown out the window.

Earlier in the show, the premise was that the Authority would pick the main event participants based on who could impress them. Well, the main event for Fast Lane should be based on the participants in matches from the night, right? NOPE! It will be Brock Lesnar versus Dean Ambrose versus Roman Reigns. Oh who the hell cares at this point. Triple H will face Roman Reigns, and that’s that. Same old BS. 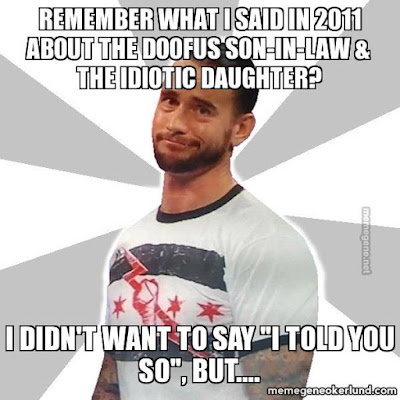 Just when you think it was over, consider this meme, because well, that’s what is happening right now. Not a great Raw, not a great post-Rumble event. Remember, this was the HULU version, I may have missed matches. So yeah.
Posted by Unknown at 7:34 AM No comments: 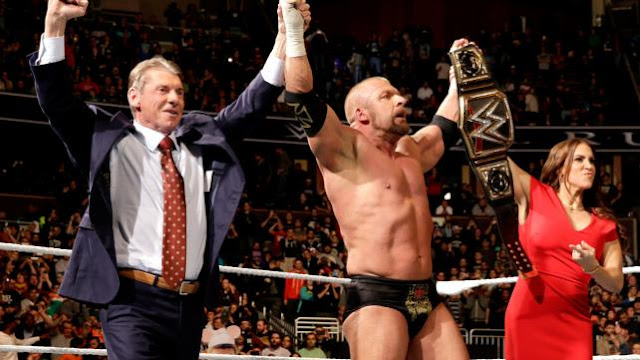 We are in a time machine aren’t we? If you read my Royal Rumble 2016 predictions, you know that all my picks were wrong. I still, for the life of me, cannot believe Daniel Bryan didn’t come out of the back to enter the ring at number 29 or 30. Whatever the case is, though, things got shaken up. Let’s get to the results and review, but first the review, then the results, because that’s how I do this thing now.


The other teams in this match were nothing short of jobbers. This is an absolutely terrible opening. But, I will say this much, the guys put on a fun, fast paced match. The ending was clumsy. Henry and Swagger got a shot for the Royal Rumble. Oh boy. The best thing was that Damien Sandow was in this match, which was kind of cool.


This was one hell of a match. Owens and Ambrose took a beating, but it was Ambrose that really impressed with the falls and protection of Ambrose. Sick table bumps, and a 2 table dive to end this one, this match was incredible. It was a great opener, and definitely put on a showcase for fans and naysayers alike.


“What’s the New Day’s gimmick?” – My Wife. Yeah, what is their gimmick? This match was ok, but it’s painfully obvious that The Usos were outmatched, outclassed, and out wrestled. Third man antics or not, this was a match that painfully showed off that the tag division is still diminished. It was an ok match.


Boring match, but it’s nice to see Kalisto get a push. Del Rio is ripped, man, I wish I had that kind of muscle mass. Oh well.


This was a good overall match, but with Ric Flair interfering, and The Boss showing up at the end, this was a bit mired. Lynch can really wrestle, but Charlotte’s antics are going to cause a shake up in this division. Then again, who knows. I liked this match, but it was not as good as the NXT Brooklyn match that The Boss had.


Let’s talk about AJ MOTHER EFFIN STYLES! Holy crap! AJ STYLES! AJ STYLES! This was an incredible reaction. The rest? Well, it was good to see things here. However, Triple H winning and Roman Reigns getting another loss is definitely not a great one. Let's talk game changers though, since we know that Triple H lost.

Chris Jericho’s 50 minute run! Holy crap, I thought Jericho may have won this match after seeing his incredible performance.

Brock Lesnar and Brown Snowman. Snowman wouldn’t go down. Lesnar did a lot of hard style hits, and took down a lot of the Wyatt Family, but he got dumped out.

Roman Reigns is no Steve Austin.

Kevin Owens against the world, holy crap. Watch this again just to see him wrestle. Incredible.

Overall, this was a B rating, with some disappointment coming through at the end. I wanted Aj Styles to win, or Daniel Bryan to show up. That’s it. Good night! Or whatever. I’m getting HULU tomorrow as a result of the Rumble, that’s for sure.

Posted by Unknown at 6:42 AM No comments:

Who Will Win The Royal Rumble 2016 - Predictions 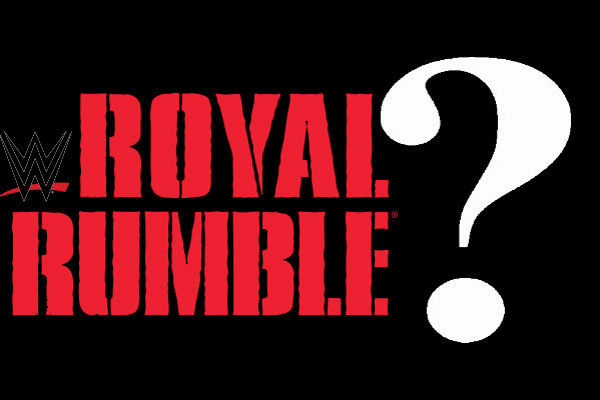 I don’t have cable right now, and I don’t have Hulu right now. So what can I possibly do? I can only watch the WWE network, and that means that this weekend I will be seeing the 2016 Royal Rumble. With that in mind, I have to figure out who’s going to win. There’s a lot of options to go with, but since the WWE didn’t announce every one that will be in the rumble, I’m going to have to pick a top contender. Who will win the Royal Rumble?

I have narrowed it down to 2 people, and that’s going to shock absolutely NO ONE, since no one reads my crap. I mean, I have been writing since 2007 and yet I can’t even get picked up to write for Nodq.com. Nope. They picked up some millennial idiots. Who cares. Here are my 2 picks.


I don’t hate the guy, but it seems that the WWE wants to push this guy no matter what anyone says. So I see him not only lasting until the end, but also getting a beating on the way. He’s going to get taken out and possibly knocked out of the ring, and on the floor until the end. I don’t see him losing this match.


It makes sense. Give the title to Lesnar, have him sit on a throne. Then have Triple H fight roman Reigns and if he wins, he’ll get his Wrestlemania title shot. It’s simple booking.

What about the wild cards? There are 3 Wild Cards that I can think of, and they are:


That’s right, AJ Styles enters the arena, the crowd goes nuts. He hits 3 moves, and then this happens:

“Aj Styles gets tossed out of the ring, moments after making his WWE debut.” – Michael Cole


I don’t know. WWE clear the guy! I’m sure they’ve kept it a secret, or perhaps they are doing something big. Expect the unexpected…oh wait, it’s 2016, just sit back and enjoy the event.

Quick note, main image SRC is http://whatculture.com/ a better site than mine.
Posted by Unknown at 10:01 AM No comments: