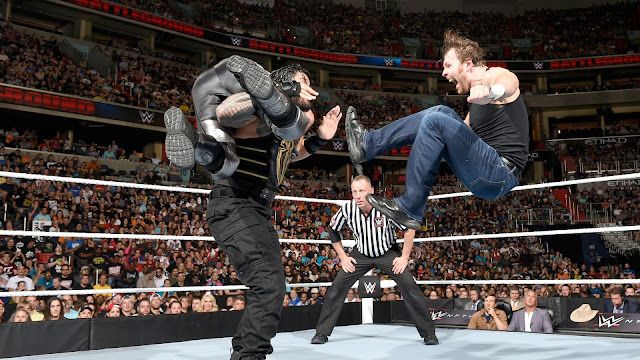 This weekend I was able to catch WWE Battleground, and while I didn’t review it right away, I figured it was better to do so today than never. Not that anyone is reading, but hey, I give it a good shot. Here we go the WWE Battleground results and review by me, Sir Jorge.


This wasn’t half bad, a lot of high flying action. The Usos are great together, that brotherly bond is nice to see in the ring. Breezango is funny, their antics catching Pokemon have me laughing a bit during Raw and throughout their promos. I don’t play myself, but maybe I should.


The surprise teammate aspect intrigued me, and the overall match was really good. The match showcased Banks and Bayley throwing down some lethal combinations before they finally took out Miz and Riley, I mean Charlotte and Dana once and for all.


Boring match. Wyatt’s win. New Day sucks. Big E is going to break his neck going through the ropes every big match. He needs to stop.


Zack Ryder is so athletic, and yet he is useless against Rusev. I’m sure John Cena can come in and deflate the Rusev Balloon. Boring match.


Match of the night. Some of the moves didn’t make sense to me, but hey, I loved this. It was a good back and forth match. But it’s unbelievable to me that a frog splash and a superkick can’t put away a smaller wrestler. Sorry, nitpicking.

Intercontinental Champion The Miz vs. Darren Young ended in a Double Disqualification


I like Darren Young enough, but this match had no one surprised, and it was funny to watch. It was ok at best.


Not bad. I was actually thinking Roman was going to win this one, but nope. He is going to eat plates of dog poop and like it from now on. It’s funny, Lesnar is busted for drugs outright, and he is not suspended at all. Roman gets busted and he’s gone for 30 days and loses 2 nights in a row. This was a good match, but I don’t like The Shield, and don’t like this match. Although, I like that Colby Lopez is Latino, or at least in a Latino family. Sup essay?

The overall event was ok at best. I was bored midway through. I need to get Hulu again.
Posted by Unknown at 4:32 PM