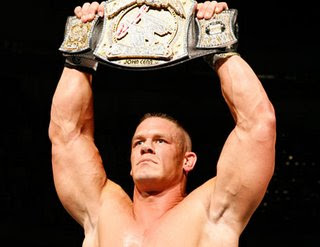 John Cena is not the champion right now. However, I couldn't help but notice that on Raw he got a piece of the championship pie handed to him.

The crowd at each arena is not fully behind John Cena anymore, and it's odd to see that he's in the fold chasing the title.

I think it's ridiculous that once again, at Backlash, we're going to get a multi-man main event with little to no implications for the future, outside of the crowning of a potential John Cena title reign.

Or am I completely wrong?

Think about it for a moment.

Why would Orton, HHH, or JBL be the champions?

Orton has had the title for a long time now, and I for one am tired of seeing a horrible heel champion. Sure he has some microphone skills, but his matches are plagued with lackluster endings, especially ones that involve a stupid kick to the head in the most impromptu times.

JBL has been sitting on the sidelines for so long, that it doesn't make sense for him to clothesline himself into a world title reign. He's been to the mountain top before, this time is not going to be a great moment in WWE history if it is the intentions of the WWE to hand over the title to JBL.

HHH? HHH is due a title reign, but he hasn't been in any memorable feuds to qualify him for the job. HHH is solid, but he just lacks the emotion and face to work on his heel position...I understand he's face right now, but he's a poor face if the heel is nothing more than a young champion with a kick to the head.

However, the amount of merchandise that John Cena can move as a champion is not really rivaled by any other potential champion.

He's also young enough to move into another memorable feud.

The ultimate example of what they could do with John Cena is to turn him heel, out of frustration. Have him lose at Backlash, lose the next night on Raw, then cheat his way back into the fold! Cheat his way in, hit someone with a chain, get caught and start rapping again and not caring with the kiddies think. Stop saluting people, stop trying to be the wholesome one, and just do what he used to do...when he got over with the adults, despite his lackluster move set.

Liked this post? Want to help me keep blogging? Buy a dvd or two from Amazon.com and save up to 75% off WWE merchandise, and get free shipping while you're at it; just click HERE
Posted by Unknown at 9:11 PM