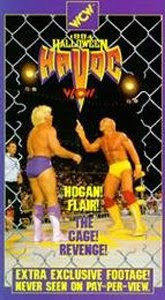 Come on now...think back to Halloween Havoc 1994! The cage match of the century, Hulk Hogan vs. Ric Flair and if Flair lost, his career would be over.

The match had Sensational Sheri, Mr. T and others interfere to help save Flair's career, and to no avail, he lost to Hogan, and Flair didn't retire.

He had no farewell speech, he had not Monday Night interview, he left.

He didn't return till next year, when he was attacked in the crowd and set up a feud with the top guys in WCW at the time.

So why is he getting praised now?

Who cares about Ric Flair and his crummy retirement?

Terry Funk retired, remember that? It was on film, and what happened? He came back to the WWE and wrestled full time some more afterwards.

We always see legends hang up the boots, only to get an itch and come back.

Had Curt Henning not died, he would have had a long term career with the WWE as he came back after Royal Rumble and was doing really well.

Ric Flair is good, but he's not gone. He'll return, and everyone will be wooing when he shows up for another match at Wrestlemania to teach the disrespectful a lesson.


Liked this post? Want to help me keep blogging? Buy a dvd or two from Amazon.com and save up to 75% off WWE merchandise, and get free shipping while you're at it; just click HERE
Posted by Unknown at 1:31 PM