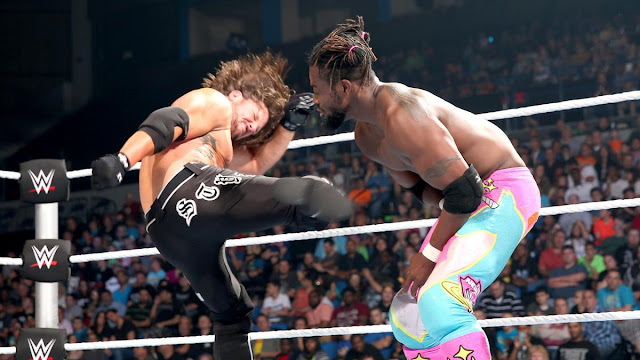 Another Smackdown came and went, and well, my stomach hurt. So I saw this, but didn’t pay as close of attention as I usually would, so this review comes with a side of intestinal distress.

The New Day showed up to start the show, and I hate talking openings. They get interrupted by The Club Sandwich guys. Then set up a match for later between Kofi Kingston and Aj Styles.

Becky Lynch came out, and I couldn’t help but notice that the WWE is piping in cheers for her, because the crowd wasn’t big on this. In fact, the more you listen to the Smackdown audio, the more you hear post production cheers when they would normally not get heard. It’s a sad state. The sound guys are getting whipped backstage, no doubt. Charlotte lost due to Dana Brook interference.

Natalya showed up and ran away the champ and her new buddy. That was that. I’m still waiting for this diva’s revolution because all I see is the same stale booking that made the “divas” division so boring.

Not a terrible match, not a good match, the match! I kid. This wasn’t terrible, but you knew what was going down. The Dudleys win, finally.

I never understand the WWE’s latest crop of stars constantly doing suicide dives through the middle ropes. It’s dangerous, and everyone does it, so why it is special? This match was as good as you’d expect from these guys, and definitely a fun thing to watch. What bugged me about the show is the post production audio that is like watching a sitcom. It’s terrible. Other than that, good work, great back and forth, and a classic story of whether or not these teams can coexist, considering they are going to be wrestling one another at Money In The Bank. Of course, they couldn’t, and Del Rio knocked out Owens, before Zayn won after the HELLUVA kick on Del Rio.

After the match Kevin Owens was going to pull down the Money In The Bank briefcase but Cesaro came down and did it for him, after a really cool mid-rope twisting European Uppercut, in a SUIT no less. Cool spot.

Swagger is still employed? Rusev wins, Swagger got some fight in, but it was Rusev that won yet again. I’m sure his feud with one half of the prime time players will come through and make him worth watching. Whatever. I don’t like Rusev. Boring match.

Good main event, P good even. Aj Styles picks up the win, but The New Day made The Club Sandwich guys look like a chump outside as they were beat up. Other than that, Kofi and Styles put together a good overall match, worth tracking down.

The main event saved this one. Like most Smackdown shows, the main event was the only thing worth investing into, the rest, dull as usual. Maybe the brand split will bring new hype, but until then, this is kind of boring.
Posted by Unknown at 9:40 AM