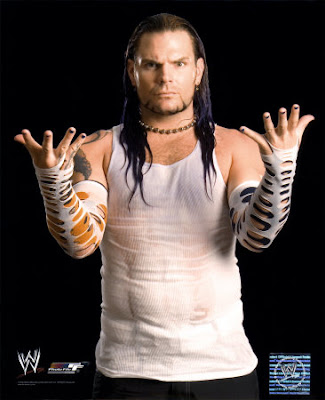 Jeff Hardy took a major shot today, as the media blitz continues, allowing him no room to breathe. The WWE has suspended Hardy for 60 days! This is his second infraction with the wellness program, proving that he was on drugs. What drugs? No one is really talking about that part, but that would be the reasons why he lost the title last night on Raw to Chris Jericho.

How long did the WWE know that he had a drug problem though?

Last week, it appeared that the match for this week was set up, and this Monday Night, apparently the backstage area knew about the suspension, and although all these factors played out during the Raw event, the fan base was fully behind Y2J.

Did the WWE purposely let Y2J chants reign supreme last night? Or was the crowd really that hot for the former WWE champion to get a title!

Whatever the case was, the match went off well.

Overall, the show was good, however there were some harsh tones.

I didn't enjoy the Finlay, Kennedy situation, ruining any credibility that Kennedy had as a wrestler. He's NOT a jobber, but what must be done, must be done.

The rest of Raw just seemed like garbage to me somehow.

The title change was a great surprise to me, and even though I had read a lot of rumors, the suspension and drug use of Hardy came as a surprise to me.

We'll see what the WWE is going to do with the extra spot in Money In The Bank, as well as the intercontinental championship, which is now boosted to credible levels with Y2J at the helm!

Liked this post? Want to help me keep blogging? Buy a dvd or two from Amazon.com and save up to 75% off WWE merchandise, and get free shipping while you're at it; just click HERE
Posted by Unknown at 1:18 PM