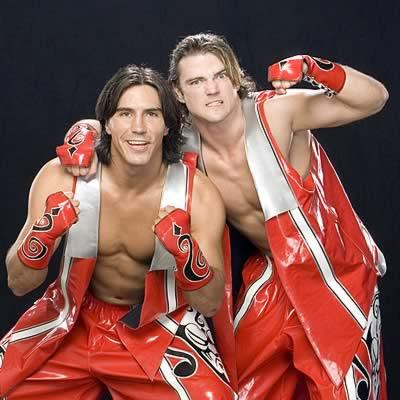 Even the WCW, with all its faults and stupidity, allowed long running tag teams to stay together for the purpose of promoting the division as a viable way to make money and promote other wrestlers. Teams like Public Enemy, The Nasty Boys, The Outsiders, and many more stuck it out for a long period of time before breaking up. They made major impacts in their respective division.

The WWE of old had The Hart Foundation, The British Bulldogs, The Brainbusters, Strike Force, The Pan-Am Connection, and so many more tag teams that went through with pride to hold the belts.

Recently, the WWE has broken up major tag teams to make more single wrestling money with them chasing the glory of singles titles. Most of them are gone now...none of them sticking to the longevity promised to them as a single's competitor. Let's check in on how these break ups have shaped the current world of wrestling:

Billy & Chuck Split Up: They were the gay innuendo twins, but they were a solid tag team and were making major waves, even garnering major pop's around the nation, regardless of their stereotypical pushing of the envelope. This team was solid, and had a manager with enough knowledge to keep things flowing well together. The break up came after a botched wedding ceremony, and media push. The two went separate ways. Chuck is now "undertaker lite" and Billy is in TNA. The singles push after the split did nothing to further their careers, and only one of them is still active in the WWE...not exactly a thrill.

The Spirit Squad: The most annoying set up, gave us some memorable moments. We all wanted to see the squad get their butts kicked, but at the end of the day, things fell apart and we saw Kenny rise out of the ashes. Where is he now? Not exactly the main event star that J.R. was creaming over is he?

The Hart Foundation: One of my favorite tag teams growing up, split up due to injury on the Anvil, and things were never the same with the tag team. Bret Hart went on to win the world title several times, and became one of the best wrestlers of all time! The Anvil? He went to WCW and had a mediocre career afterwards.

The British Bulldogs: What a powerhouse team full of energy and great mat technique. One was confined to a wheelchair, the other is no longer with us. What a career huh? The latter never even gained a world title, and his push in WCW was but a whimper in time. Though he did main event several ppv's, he never captured the gold. Sadly, he is no longer with us.

Edge and Christian: The two Canadians made a race for the titles and made things very interesting for the tag division in the late 90's with heroic efforts in ladder matches and high spots heard round the world. The two split up and Edge went on to be the world champion in wwe, meanwhile Christian floundered, never got a main event spot in WWE and went to TNA to get the main event spot. Christian and Edge still wrestle in the main showcases of each company, but we can all say that Christian had a hard time getting to the main event spot. The last time I saw him in WWE was Smackdown taping in Los Angeles, and then he was gone. TNA's ratings have never gone up beyond ECW's show on Sci-Fi, so you can see that there's not much hope there.

The Hardy Boys: The Hardy Boys were forever the butt of the joke of any new wrestler starting out for the WWE. Those guys got worked on many occasions, and then one night they shocked the world winning the World Tag Team Titles. They were split into single entities and pushed towards separate roads. Jeff had to sit back and watch Matt get prime time feuds with the likes of Edge and others, until he got injured. Then Jeff took a major push, only to be hindered by the latest suspension due to drugs. The hardy boys did make a couple of comebacks, but never really made it back to the tag team division in a major way.

The Dudley Boys: The Dudleys were a major tag team together, then the original roster split occurred when WCW and ECW were bought by WWE. They went separate ways and neither did well as a singles wrestler. One might argue that Bubba Ray Dudley got a push, but it was short lived to say the least.

Strike Force: The first time I remember the break up story line occurred. Tito Santana floundered after this break up, meanwhile Rick Martel became The Model Rick Martel and had a good solid run through the mid 90's paving the way for Razor Ramon to get into the spotlight on Raw, and the intercontinental title.

Last night on Raw, history repeated itself and the WWE made the first moves to separate Kendrick and London. If they follow through with this, I do not see a viable singles career for either one.

Consider the smaller wrestlers in WWE for a moment.

Where is the Cruiserweight title?

Liked this post? Want to help me keep blogging? Buy a dvd or two from Amazon.com and save up to 75% off WWE merchandise, and get free shipping while you're at it; just click HERE
Posted by Unknown at 2:28 PM