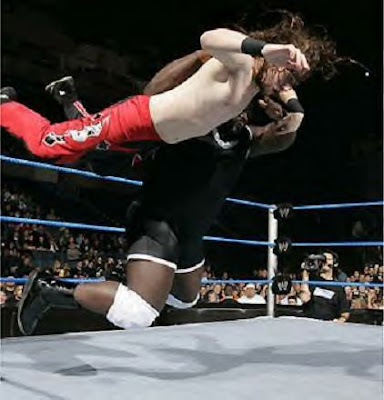 Am I the only one worried about Mark Henry? Seriously, Mark Henry is getting a serious push heading into WWE's Wrestlemania this weekend, and I'm starting to get worried. Recently on Smackdown, Mark Henry beat down Kane & Great Khali on the road to winning a special over the top rope battle royal preview match.

After the major beatdown, Mizark Henry followed up by beating down Chavo Guerrero.

I'm not sure if this is the WWE's way of setting up Mark Henry for the fall, but I for one do NOT under any circumstances want to see Mark Henry get any kind of push.

Don't you remember just a few weeks ago, he was jobbing to every major wrestler? He was losing in under five minutes!

Now he's the dominate force on Smackdown, and is headed for an ECW championship reign?

I sure hope not.

Watch out for Mark Henry, he looks like the next ECW champion...hopefully something gets in his way.

Wrestlemania is this weekend, get it, or be left out. I'm ordering it, that's for sure.

Liked this post? Want to help me keep blogging? Buy a dvd or two from Amazon.com and save up to 75% off WWE merchandise, and get free shipping while you're at it; just click HERE
Posted by Unknown at 8:08 PM