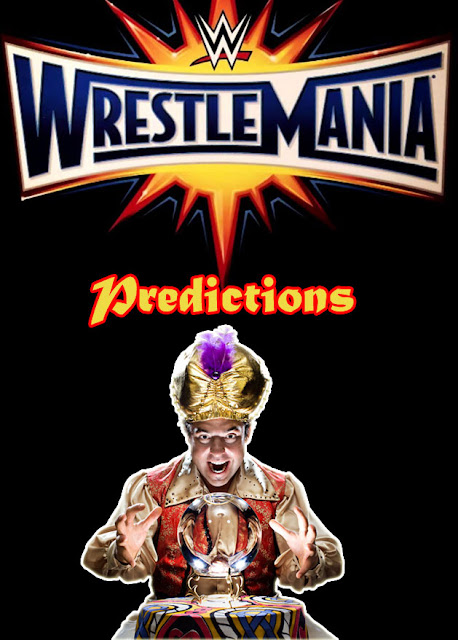 This weekend, a lot of wrestling is going to happen. While I will be reviewing and discussing NXT Takeover, I am not going to discuss it right now. I’m not going put predictions on it, even though I know The Drifter is going to the main roster.

What I will be talking about, however, is Wrestlemania 33 predictions. These are based on my opinions and not spoilers. I am not going to Wrestlemania this year, but maybe I will go next year. I don’t know. I don’t have any friends, and don’t know anyone, so I’m going to explore other options first.

I’ve crunched the numbers. I’ve watched old Goldberg matches, and I’m going to say that this one is easy booking for me. Bill Goldberg is once again going to bury Brock Lesnar. Lesnar is going to get embarrassed because of all of the b.s. that he has said in the past. He has gone on record to say that he doesn’t give a flying F about what Stephanie McMahon thinks, and is only into wrestling for the money. Well, let’s teach him a lesson, Goldberg will bury him, then the title will get dropped via Money In The Bank or another method. Goldberg will beat Bork Lazer, bank on it!


Bray Wyatt and Orton will wrestle a stiff match because they have no chemistry. I expect Rowan and Harper to show up and align themselves with Bray Wyatt again. Orton will lose, and that’s going to be the end. Unless, he was promised a title because of doing the job to Lesnar and getting busted open hard way.


Bayley retains her title. There is going to be a point where Bayley’s friendship is going to get tested. She’s going to pick up the pieces of a Nia Jax and Sasha Banks beat down. Flair will not be a factor, and Bayley will have to decide if she is really friends with Sasha Banks or if the title means more. This is going to be the story, but Bayley will win and hang on by a thread.


Kevin Owens and Jericho will put on a fine match, but it’s going to be Owens that wins and that’s that. He will have the United States title, and will get booked like a chicken again, and we won’t ever know about the prize fighter’s legacy, because the booking will be stupid. Jericho will go tour with Fozzy.


Baron Corbin will not only win against Dean Ambrose, he’s going to do it with a quotation mark tied to it. Look for Ambrose to do his normal spots, and get bored in the middle of the match, with Corbin finally getting a title and holding onto it for a long time.


Assuming the Hardy Boyz are not going to crash the party, I’m going to say that Big Cass and Enzo somehow pull it together and defeat the Club Sandwich boys and the foreigners.

However, if the Hardy Boyz crash the party, they will win the tag team titles, and the crowd will erupt in “delete” chants.


Seth Rollins will edge out a victory here. However, Triple H is going to beat the bricks off of Rollins. Rollins will need help getting to the back, and Triple H may bleed for this one.


Well, this is the end. The Undertaker will retire after this. Roman will remain strong, and that’s that. Good night old man.


John Cena is not only going to lose, he’s going to lose big. Nikki Bella is going to betray him because she is going to realize that Cena will never commit. Cena will go for a tag, or will need help, and she will leave him hanging. The Miz and Maryse will then put the boots to him and he’ll lose. This will cause him to throw in the towel on his good guy antics and he’ll be a super heel.


The way they are booking Aj Styles, I’m going to say that he is going to lose against Shane McMahon. I don’t want to see this, so I’ll just say that Shane wins with the help of Daniel Bryan.


Naomi is going to show the crowd the power of Glow, but the time her match is slated to begin, it will still be light, won’t it? Whatever the case is, this match will end with Naomi getting the pinfall, and that’s about it.

That’s it. Brown Shoeman will win this one that’s it.

As for anything else on the show, I don’t know. I’m going to be sitting at home, drinking as much as I can, and eating more pizza than I know what to do with. I may be right on these, I may be wrong, no matter what though, I’m going to enjoy myself.
Posted by Unknown at 11:35 AM