WCW Clash of The Champions 22 1993 Results and Review 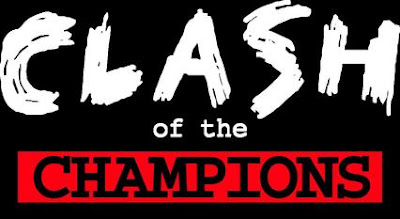 WCW Clash of The Champions was a program that WCW would put on for free These were super cards that were filmed for television and usually had around 7 matches or so, with some great main events and overall wrestling. These were FREE, but the matches were often like PPV. I’m going to be reviewing as many WCW cards as I can as I move forward with watching all of my wrestling video collection. These are available on the WWE Network since there is no DVD or VHS version of these events.

First of all Jim Ross was calling all of the action, but of course WWE snaked him and he would be at Wrestlemania later. Ross was great on the show, and well you can’t really get the same reactions from others. Here’s the card and my thoughts.

Johnny B. Badd was so cool back then. Cactus Jack was extreme, but he wasn’t as extreme as he would get with Terry Funk or with ECW. Foley was making six figures in WCW, and he was taking a beating already. He took on a few insane bumps here, and won in 3 minutes or so. Badd is so charismatic in this role, it’s fascinating.

I have no clue why 2 Cold Scorpio didn’t get more of a push in WWE, he’s amazing. Flamingo is of course, Raven, and this match was fast paced. Raven could go fast back then, and Scorpio’s high flying moves are impressive. This was a fun 5 minute match.

Brad Armstrong doesn’t get enough credit for being such a great wrestler. Here he shows up and wrestles a great overall match with Chris Benoit. Benoit would get the win, but Armstrong is no slouch. Bischoff once commented on the fact that Brad was a quiet, easy going guy backstage, so he never made it past the midcard at best. That sucks, cause he’s really good here.

This is laughable. Do you know who Vinnie Vegas is? It’s Kevin Nash. Simple as that. Tony Atlast, you already know. This was pointless.

Not a great match, but hey, it was 1993 and the rosters weren’t as big. The Wrecking Crew are typical big heels, and Zenk with Gunn got beat down after around 6 minutes or so. A throwaway cooler match.

Holy crap. This is the highlight of the show. Douglas and Steamboat are so fast here. They put on a showcase of fast paced wrestling, and Pillman is gold with Austin. The Hollywood Blondes are a tag team of epic proportions. Pillman is a wrestling superstar here, and Austin is so crisp and sells so well, you almost forget that he was fired by WCW. Pillman is incredible here, but Steamboat and Douglas are no slouches, as they pull off the big win in 15 minutes. You gotta watch this one. Their feud this year went epic, by the way.

This was odd. Before the match ever started Ron Simmons and Vader got into a fight. The main event started with Dustin Rhodes and Sting against Vader, Windham, and Mr. Wonderful. The whole thing turned into a giant brawl, and out of the blue Cactus Jack came down with some wire cutters and broke into the cage. Then he would proceed to take over and win the match for the team. This was a brawl, and led to Superbrawl’s main events.

Overall, this card was definitely a B show. It wasn’t great, but there were a few highlights. 2 Cold Scorpio, Cactus Jack, and the tag title match all make this event worth checking out on the WWE Network. I liked it a lot.
Posted by Unknown at 2:39 PM