Combat Zone Wrestling Best of The Best 17 Results and Review 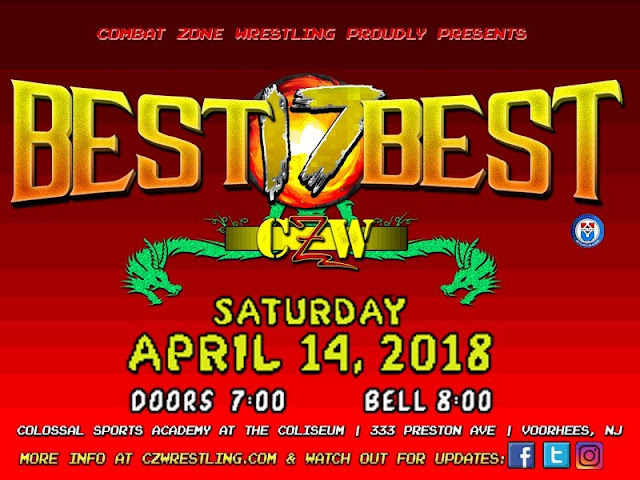 As promised, here we go, another event. This time around I’m looking at the recent Best of the Best Tournament from Combat Zone Wrestling. This occurred on April 14, 2018 and it was streamed on IPPV and other formats I’m sure. If you didn’t catch it and are interested in my opinions, here we go.

Combat Zone Wrestling Best of The Best 17 Results and Review

The first match was a triple threat match in which the King of Bros, Matt Riddle was able to take out two guys that weren’t measuring up. Curt Scallion and Wheeler Yuta were good, don’t get me wrong, and they put on a good match, but Riddle had their number and it was curtains for these guys when he finally got warmed up. A good opener for sure.

Another triple threat match, and this time I was completely impressed by Tessa Blanchard’s performance. David Starr is growing on me, this is the third or fourth event that I’ve seen him wrestle on and was impressed with his timing. Blanchard should be in WWE, here timing is great too, and poor Peter Avalon lost this one, even though he gave it his best shot. Starr and Blanchard made him tap out, and the two would advance in the tournament.

There just is a lot of triple threat matches in this event, and why not? This match featured Joey Janela, the bad boy, Joe Gacy, Brandon Kirk and Rich Swann! That’s right, Rich Swann showed up and was dancing around, and I’m glad to see him back in wrestling. He was dancing and doing his normal thing, even in the ring. Janela, Gacy, and Kirk worked well together and Swann was stealing the show at times. I liked this back and forth match with lots of action, as you’d expect from the smaller guys in pro wrestling overall. I loved it. Gacy would get the win, and that was that, he’d move onto the later rounds of this tournament.

I didn’t really know much about Wentz here, but he was able to garner a victory against Reed and Miguel. Another good triple threat match, with not a lot to write about, just back and forth wrestling, some great stiff shots, and some nice top rope moves before Wentz got the win.

Wentz moved forward with the tournament and wrestled Joe Gacy. This wasn’t too bad, and Wentz really showed up to perform, while Gacy was surprised by the onslaught that was garnered. Wentz through down some great options, and Gacy was mad when he lost, but Wentz just had a little more in the tank than Gacy did this time.

One hell of a match here, and Riddle should’ve won if you asked me. Blanchard and Riddle teamed up at one point and were killing Starr. Starr was able to maneuver well enough, and eventually tied up Riddle into a pinning combination where his arms were locked and his back was down, so he got the pinfall. Blanchard again impressed me, Riddle is seriously good, and Starr is definitely deserving of the win here.

Not much to say here, just a normal hardcore match is what this turned into. A lot of blood, a lot of chair shots, and stiff hits to the dome. The Rep is an interesting tag team, while the other guys look like War Machine, and well, they did ok. This was a filler match, and while I appreciated the effort, it felt out of place during this pure wrestling tournament.

I’ve never seen either one of these guys, but they put on a good enough match to make things move forward. It was slow starting, but over time, Friedman grew on me, and eventually would get the big win. It took a great deal of time to build this, but in the end, Friedman got the pinfall and that was that. Not a great match, but definitely a good overall championship match.

This was a great overall match and a fitting end to the tournament. Starr really put on a show and Wentz answered most of his offense, with great back and forth. Starr would eventually get the pinfall with one hell of a piledriver combination, and that was that. This was great, back and forth, high flying, submissions, strong style, and lots of great moments, although a bit much on the no-selling certain spots, but oh well, Starr won and really made the show great.

Overall, CZW Best of the Best 17 was a good night of wrestling, and while the crowd wasn’t huge, the matches were good, and everyone did a good job with putting together an entertaining showdown. I recommend checking this out if you can, and seeing what else CZW throws together.
Posted by Unknown at 3:40 PM