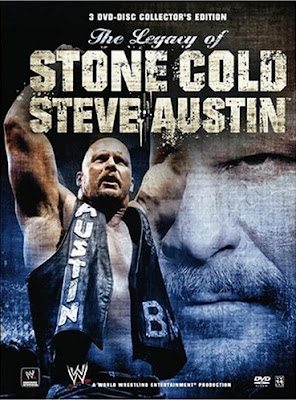 Is this dvd worth it?

Yes, but this three disc dvd set is the most complete dvd on the Texas Rattlesnake known as Steve Austin that the WWE has produced. There are a lot of good points on this one and I recommend it highly.

This is not the complete and utter history of Stone Cold, but it is a good enough chunk of his days in WCW, WWE, and even ECW to hold over any diehard Stone Cold Fan.

Is it worth the price?

However, if you’re like me, you’ve already seen all that Steve Austin has done. I do recall mentioning that I had 3,000 vhs tapes at one point. It’s all locked away in the memory bank.

My favorite match from Stone Cold is definitely Hart vs. Austin at the Survivor Series 96, which was a technical masterpiece.

If you don’t remember that one, it was where Stone Cold was antagonizing Hart for leaving after losing the title to Shawn Michaels. He antagonized him to the point that at the Series, Hart and Stone Cold would make history.

The feud wouldn’t end there, they battled it out all the way to Wrestlemania 13 where Hart turned Heel and Austin turned face.

Whatever the history is, this is a great set to pick up. Some people will complain about how it’s a little scarce on the WCW histories, but I think it’s worth it. Not everyone can have a massive VHS collection and not everyone really needs to see his feud with Dustin Rhodes or his involvement with some of the Heels in WCW.

Check out The Legacy of Stone Cold on Dvd, and order it from Amazon.com…or pick it up at your local store.