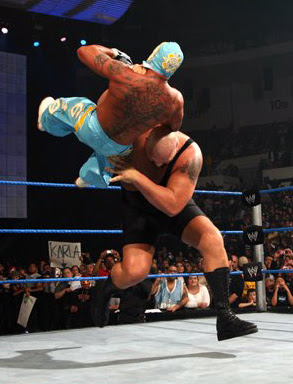 One thing about professional wrestling that no one really thinks about is, the huge population of Latino Americans that love Professional Wrestling.

I know, a shocker.

One thing that has been bugging me is how WWE is going to cope with the loss of Rey Mysterio. Like it or not, he’s the cornerstone of the Smackdown brand and the reason why the ratings are so high across the demographic of Spanish speaking wrestling fans.

Some might be quick to say that Batista is going to fill the void, but Batista is not latino.

With the burial of Psichosis and Super Crazy, the WWE maybe settling for less with the withdrawal of Mysterio due to injury.

Who can fill the gap?

We all know that there is no way in hell that AAA or CMLL is going to let one of the luchador’s come into the U.S to work a limited routine with the WWE.

Plus the last time the WWE courted a Mexican wrestler, Stephanie McMahon wanted to take his mask off and ground his aerial maneuvers.

Well, maybe the better news is not so much that WWE is going to have to elevate some Cruiserweights to replace Mysterio in the main event hunt, but rather the fact that the CW (which is a huge network for minority demographics) isn’t going to renew Smackdown.

That leaves WWE with what?

But one thing is interesting; WWE airs Monday Night Raw on Sundays via Telemundo, the whole thing, which means that Latin American fans are already getting their WWE fix.

That’s ok, since Mysterio is out for a while.

Liked this post? Want to help me keep blogging? Buy a dvd or two from Amazon.com and save up to 75% off WWE merchandise, and get free shipping while you're at it; just click HERE
Posted by Unknown at 7:37 PM