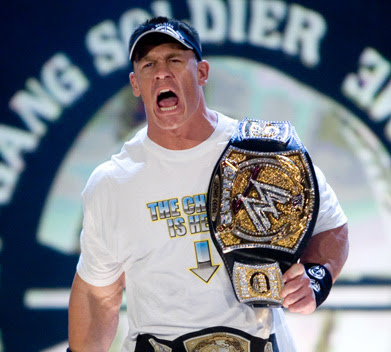 Cena showed up as number 30 last night at the Royal Rumble but can he win the fans now?

Last night it was huge when he came in, I marked out like a little school girl, but does he have enough to get a good handle on what the adult fans want as far as a wrestler is concerned?

I think he can.

But not in the way he was before he left.

Here are some things he absolutely needs to do:

1. Stop being superman. Lose at Wrestlemania, but cheat and lose. Do what Austin did at Wrestlemania 13, go in hyped and cheat, get caught, lose clean.

2. Turn on the fans! Have Cena bad mouth the fans for not wishing him a speedy recovery, for doubting him.

3. Rap! Have Cena rap and let him freestyle offensively.

4. Interrupt people during interviews, then hate on them with verbal rhymes. This is imperative. Have Cena interrupt Vickie on Smackdown, interrupt JBL and Y2J, have Cena just not care anymore.

Those steps are absolutes, if he does those three things he will win the adults. He needs to stop being kid friendly, and become heel again. That is when he was great to watch.

Cena may have a limited arsenal of wrestling moves, but Hogan didn’t need amazing moves to get over, and I still believe that Cena’s mic skills and limited skill set are a strength for him as a Heel!

Before Austin injured his neck at Summerslam, he had a lot of moves, post neck surgery, he had very little moves and was very predictable in the ring. However, outside the ring and leading up to the matches he was insane, he would interrupt people, cuss, drink beer and just not care.

Cena can be the same way in his own right. He has the charisma to be larger than life, but since he’s been toned down and “kid safe” he’s not winning the adult fans.

This is wwe’s chance to change things up…but will they?

Liked this post? Want to help me keep blogging? Buy a dvd or two from Amazon.com and save up to 75% off WWE merchandise, and get free shipping while you're at it; just click HERE
Posted by Unknown at 4:25 PM