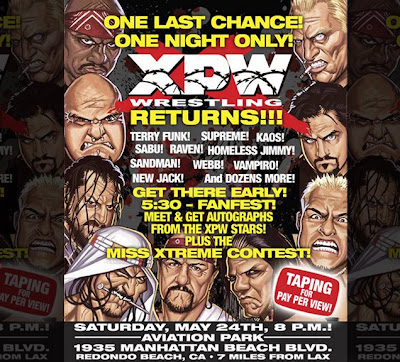 XPW ran its “Cold Day in Hell” reunion show Saturday night in Los Angeles . While fine for nostalgia, the show was pretty weak in terms of both work rate and production, and the organizers are going to have to do some pretty heavy editing before releasing this show on DVD and pay-per-view, both of which are in the plans.

The event started with a two-hour fanfest inside the arena, which was actually a basketball gym on the property of the Northrup Grumman corporation. Although the fanfest was advertised as both an autograph session and Q&A, only the former turned out to be true – there was no Q&A, although I suppose if you wanted to ask a question to one of the wrestlers while receiving a $10 autograph (on top of the $20 admission price), you could. Some wrestlers, including Vampiro and Kaos, did not appear to be charging for autographs and photos. One fan asked Vampiro and Kaos to pose for a photo together, but not wanting to break kayfabe (they faced each other at the show), Vampiro refused.

There was some confusion regarding when the fanfest was supposed to end and the show itself was to begin. Eventually the doors opened at 7:20 p.m., only 10 minutes before the scheduled start of the show. By the time people were seated and the event was getting under way, it was already 8:15. Two guards were wearing Atlas Security shirts. The rest were just wearing generic “Security” shirts.

“Cold Day In Hell” started with a Dynamite D Memorial battle royal. The first participant was introduced to the crowd, but then everyone else just started walking down the aisle without any intros. By the way, there was a simple stage at the top of a small ramp. The building also featured large-screen projections, but for some reason, none of the live action was shown all night.

The battle royal featured several Latino wrestlers working a cholo gimmick, probably to try and pop the local crowd. The crowd favorite, though, was a skinny Asian wrestler whom everyone tried to eliminate. When he was finally thrown over, the building erupted in boos. The eventual winner, Carnage, won by setting on fire his taped hand, then punching his final opponent over the top rope. He gave his winner's trophy to D's mother, who was in the crowd.

Up next was the Miss Xtreme competition, which didn’t seem to have any clear rules. Even though the XPW web site advertised eight contestants, five girls came out, and were asked to perform an “extreme talent.” The first girl gave someone a lap dance; the second one took off her top to reveal nothing but an “X” taped across each of her breasts. The third contestant claimed to be able to chug a beer, but ended up choking on it, much to the dismay of the fans. The fourth girl wore a schoolgirl outfit, and truly went extreme by having a male companion pull up her skirt and spank her repeatedly with a glove wrapped in barbed wire. The girl was noticeably bleeding from her upper legs for the remainder of the segment. Finally, the fifth contestant tried to cut a heel promo about how she didn’t have to do any stunts in order to impress anyone, and proceeded to attack the other girls.

It was now 8:40, and it looks like this is where the main card started. Kris Kloss came out and introduced the first match, which was Kaos against Vampiro. Kaos cut a promo saying that, in the old days of XPW, this was the point in the show where Shane Douglas would come out and start complaining. He then put himself over for a while, until Vampiro emerged with no music or intro. The match started, and after several minutes of exchanging chops and punches, Vampiro cracked a package of fluorescent light bulbs over Kaos’ back. With blood running down Kaos’ back, and shattered glass all over the mat, the two brawled out into the crowd, with Kaos eventually going through a table. After probably about 10-15 minutes of slow, plodding action featuring lots of overly deliberate action, Kaos won with a clean pin.

The next wrestler to come out (no pun intended) was Angel – or, as he refers to himself, Angel the Hardcore Homo. Angel announced that it was his birthday, and led the crowd in singing to him. His scheduled opponent, GQ Money, said he couldn’t wrestle due to injury, but said he’d left several birthday gifts on the stage for Angel. One of them literally blew up in Angel’s face, and a second wrestler – Brawlin’ Bo Cooper – came out to start beating Angel down. The match then got confusing, as Cooper and Money both spent time wrestling Angel one on one. Angel ended up doing lots of openly gay spots, including exposing his rear end and delivering both a bronco buster and stinkface. After being chased to the back, Money later re-emerged as a disguised cameraman, spitting a fireball into Angel’s face to get the win. Afterward, as Money and Cooper beat Angel down, Kraq ran out to make the save.

J. Love was out next, and was complaining that the ring was a mess (there was still lots of broken glass). Love yelled for someone to come clean the ring, and Leroy showed up with a broom. As he cleaned up, Love cut a promo on Pogo the Clown, who showed up and went after Leroy. Several “fans,” all of whom were coincidentally wearing T-shirts from a local wrestling school, ran in and attacked Pogo, who in turn ran through them all. Love got back on the mic and said she had someone else who would take care of Pogo. Sandman emerged from the audience, kendo stick in hand, and went to work on Pogo. The bell rang, so apparently this was now an official match. The two beat each other up for a while, before Love came in and blasted Pogo several times with the cane. Sandman hit him with a side Russian leg sweep and got the pin. Afterward, Sandman celebrated with a case of Budweiser. “Enter Sandman” did not play in the building.

Terry Funk came out next, and was set to guest-referee the co-main event. Funk told the crowd that Sabu, who had been scheduled, had suffered a cracked vertebra in his neck, so Funk would not allow him to compete. Sabu then walked toward the ring, but was escorted back by security. Funk announced there would be a replacement, who turned out to be a guy named KHAN KUSSION. He was to team with Homeless Jimmy against Raven and White Trash Johnny Webb.

Raven was great on the mic, running down Funk and then actually doing live commentary while standing on the ring apron. At one point, once he started to wrestle, Raven attacked Funk, bloodying his forehead. During the match, Sabu again tried to enter the ring, only to be escorted out again. The match turned into a really good and fun plunder bout, including a great table spot outside, before Homeless Jimmy pinned Webb with a DDT onto a chair.

The next bout was a six-man tag, featuring Team Revolution Pro (Ron Rivera, Disco Machine and Joey Ryan) against Team XPW (Jardi Franz, Vinnie Massaro and…special surprise guest X-Pac). Pac got a good pop, and came out to the DX music. He’s also developed quite a gut. The match was OK, and ended when the Vince McMahon impostor, Mr. McPhenom and former ECW star CW Anderson, who attacked X-Pac on the floor. Disco Machine won for his team by pinfall, but afterward X-Pac laid out Anderson, then gave McPhenom an X-Factor. It was a play off of the ECW-XPW brawl at Heatwave. X-Pac then got on the mic and said that he is back from the dead, then told us that he’s got two words for us.

The next bout was a three-way bout between Luke Hawx, Scorpio Sky and Jack Evans. From a workrate perspective, this was a really entertaining bout. It was exciting and well paced, with some really good, athletic work. This was the best match of the night, by far. Hawx picked up the win.

The Westside NGZ, who were advertised as wrestling the reunited Gangstas, started off by taking on another team instead. This bout ran for several long, boring minutes, with the crowd crapping all over the weak action. Finally, the Gangstas’ music hit, and New Jack and Mustafa hit the ring with a trash can full of weapons. They cleaned house on the Westside NGZ, and that was it for the “match.” The tag team that had been wrestling the Westside NGZ tried to praise the Gangstas, but Jack and Mustafa then turned on them, and beat the guys down, both inside and outside the ring, for probably at least 10 minutes. New Jack used a fork on his opponent. The brawl spilled way into the back of the crowd, making it hard for 90 percent of the audience to see what was happening, but when it was all over, New Jack came back to the ring bleeding a gusher. He then started into an endless promo about the team’s history and how they refused to sell out to the bigger organizations. Jack ripped into both Vince McMahon and Paul Heyman. He closed by announcing he was done in the ring and to watch your cable TV screens to see him soon. He was referring to some sort of reality series that Big Vision is shopping around.

The final match advertised for the evening was a no-ropes barbed-wire death match between Supreme and the Necro Butcher. They had Beds of Light Tubes and Mouse Traps. If you liked blood and violence, this was for you as both took insane amounts of punishment and the crowd loved it.

Overall, the work was slow, the pacing was off, and the crowd wasn’t even that hot. To his credit, Sabu actually showed up for the event, and of course he should protect his health, but the crowd was more than a little disappointed to have him advertised to compete, only to not wrestle after all. XPW actually received word a week ago and was originally going to change the match listing, but Sabu demanded they let him feel it out and see if he could work. As it turned out, he couldn't.

It’s not clear whether XPW intended for “Cold Day In Hell” to be a one-night-only thing, as was advertised on the event poster, or whether the promotion actually plans to start running shows again. Unless XPW can somehow make this event look good on camera, it’s hard to imagine that this was the event the company needed to put itself back on the map.

Notes: Mikey Whipwreck was booked a surprise but no showed. XPW attempted to reach him, only to find his cell phone disconnected...The entire show was shot in HD and is planned as Big Vision Entertainment's first-ever Blu-Ray DVD release....The one and only Atlas Security was in the house.

Check out our online store for big savings on wwe dvd, and wwe books. Our online store is powered by amazon.com so you're in good hands.
Posted by Unknown at 12:39 PM