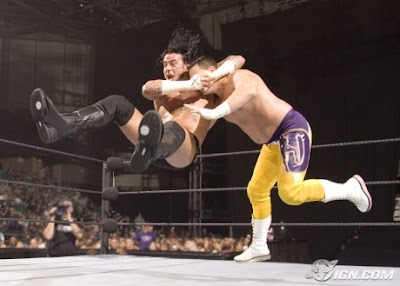 CM Punk has always been talked about by writers as a wrestler that was hated by the WWE. From stories that featured Stephanie McMahon calling him the king of the indies, but horrible in WWE, to recent reports that CM Punk has a lot of backstage heat.

CM Punk is good, and doesn’t need some ridiculous gimmick to go over. It’s also interesting to note that he is actually a good wrestler, given his size, and hasn’t been involved in any major injuries. He can even elevate his opponents at time, and made the ECW championship somewhat exciting to watch.

However, with Jeff Hardy losing the title push, and CM Punk winning the Money in the Bank match, the WWE is not in a position that they imagined.

So what do they do?

They bury CM Punk and his money in the bank title shot.

CM Punk is most likely not going to win any championship he goes for, and without socializing in the “drinking” game that goes on with the wrestlers behind the scene’s, CM Punk might end up getting fired and going to TNA sooner than later.

This of course is all speculation, as I am not working backstage at WWE, and I only know so much….so take all this for what it is.

Check out our online store for big savings on wwe dvd, and wwe books. Our online store is powered by amazon.com so you're in good hands.
Posted by Unknown at 11:43 AM