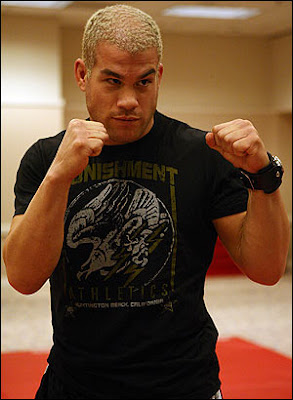 Rumor has it Tito Ortiz could in fact come into WWE. This is of course not the first time a UFC wrestler or MMA wrestler has joined the ranks of the WWE. The most notable of mma stars to join was none other than Ken Shamrock. Shamrock came into the WWE with a no holds barred gimmick, then quickly escalated into a feud with The Rock over the WWF Intercontinental Championship, before joining forces with The Corporation and other factions and eventually leaving WWE after a long run to return to MMA.

We also have seen Tito Ortiz work in TNA before, and while I had my reservations, he came across really strong to me, while there.

We also saw Dan The Best Severn in WWE for a limited amount of time, even coming out during that huge Survivor Series tournament that crowned The Rock WWE Champion by defeating a comeback kid of sorts...Mick Foley.

Here's an old interview with Tito Ortiz about competing in TNA:

UFC's contract with TITO expires this weekend, and he's not exactly thrilled about how UFC has treated Tito.

I'm not sure what goes on behind the scenes over there, but I loved his feud with Ken Shamrock, that's for sure.

Will WWE capitalize on this guy?

Is he worth it?

But the divas might see a little more of Jenna Jameson, because we all know that her and Tito are together.

All this is just in the air, I'm not sure if WWE is in a position to bank on anyone coming in and disrupting what they have.

On the other hand, TNA has Angle, and Tito could be his hired gun...only to turn on him later down the road.

Or this all could be marketing ploys by UFC to force a higher payout.

Or I could just be making it all up...but then again, why would I?

You can find out a more relevant story about this at the WWE Characters Blog, because I'm starting to ramble.

Check out our online store for big savings on wwe dvd, and wwe books. Our online store is powered by amazon.com so you're in good hands.
Posted by Unknown at 12:41 PM